The V-shaped recovery continued in the latest reading of the Cass Freight Index. Also, shipping volumes were back in the black, with the index posting a positive year-over-year change for the first time since November 2018. We should see this continue through year-end, assuming current freight trends continue, even with normal seasonal softening month to month. Inventories remain quite lean.

As for the actual amount of freight moving, Cass Freight Index shipment volumes rose 2.4% over year-ago levels (Chart 1), crossing into positive territory and improving over last month’s decline of -1.8%. This was the best growth we’ve seen since October 2018. And while the raw index number rose only slightly (0.3%) from September’s level, it was the still the highest reading since September 2019 and 27.8% above April’s low point. 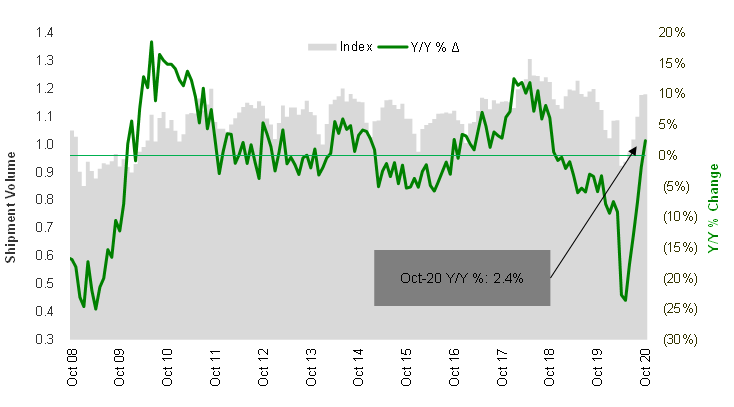 One of the drivers of the recent resurgence in freight activity has been healthy consumer spending, as U.S. retail sales had another very good month, increasing 5.2% year over year in October (Chart 2). This was driven by a mixture of the continued reopening of the economy and businesses, schools starting back up, and optimism around healthcare advances, including a vaccine (there are >20 in various trial phases presently). The momentum of good news has continued after the election, as optimism further increased due the declared positive results showed by at least a couple of the vaccines still in trial and the promise of Operation Warp Speed to get them out ASAP when ready. 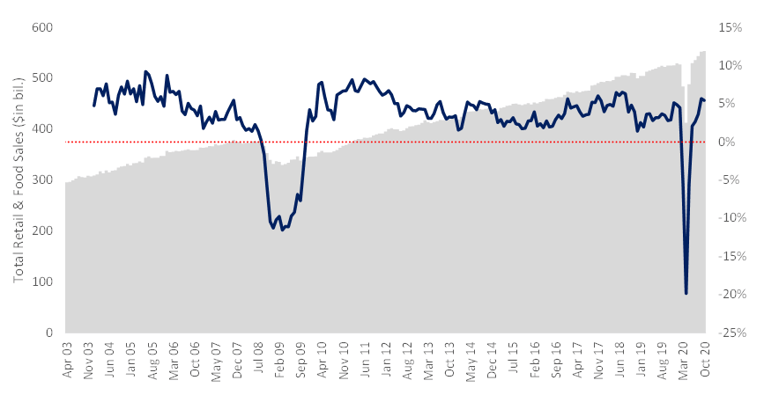 Feeding the domestic transport machine, imports were also seen growing in October. The Port of Long Beach announced a 19.4% y/y increase in October import volume (The Port of Los Angeles not yet released but should also look strong), and we expect November to be up y/y as well. We have written the last few months about this “West Coast port dump” due to low inventory levels, where large U.S. importers are bringing in a disproportionate amount of their containers to SoCal and then moving truck or rail around the U.S. to avoid stock-outs. It has not stopped. This results in higher transportation costs, but it’s been necessary to keep goods in stock (vs waiting for the longer transit time it takes for containers to get from Asia to the East Coast or Gulf Coast ports).

Also on the international side, air cargo capacity remains tight, with high rates expected into 2021 due to most commercial belly capacity staying out of the market until probably mid-2021 at the earliest. Vaccine hopes may indicate the potential for increased flying sooner, but we believe the domestic routes (which do not impact the long-haul freighter market) will add capacity first. Freighters have been operating for months near peak levels, so peak season this next month will be tight and yields high.

The weekly AAR rail traffic data (Chart 3) showed positive y/y comps through October and has bounced back in the latest week with its best reading of 2020 – both overall and excluding coal & grain. This data set tracks closely with the Cass Freight Index (Chart 4), so given that total rail carloadings are still strong, we expect Cass Index levels to remain on a positive trajectory to finish the year. 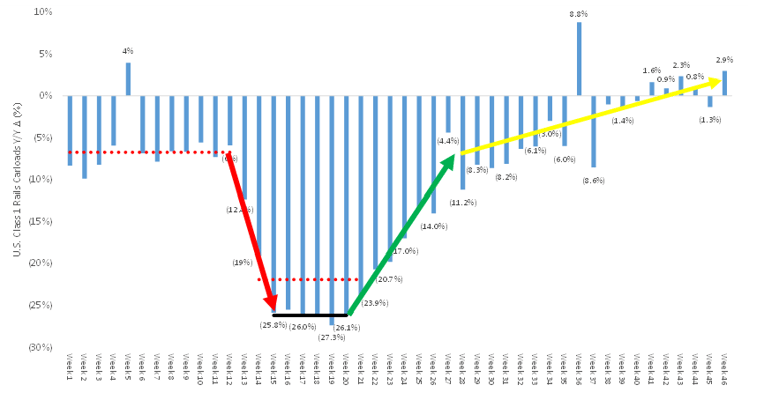 Note – Week 46 carloads are originations through the week of 11/14/2020 for BNSF, CSX, KSU, NSC, and UNP
Source: Association of American Railroads and Stifel research 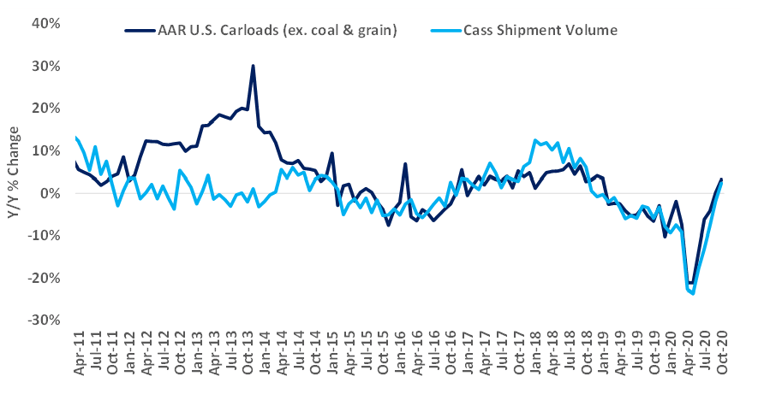 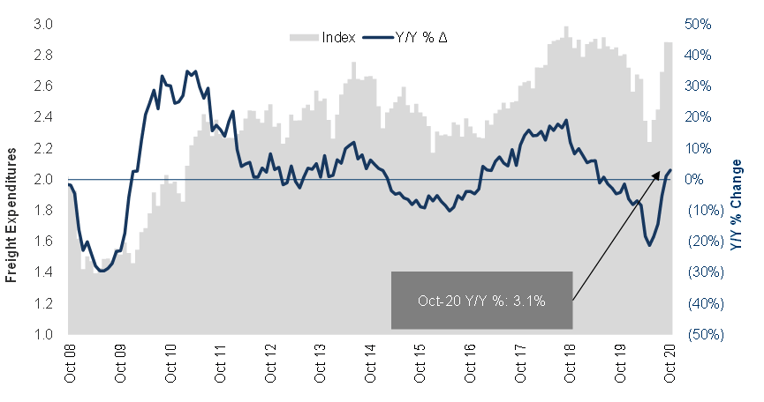 Revenue per shipment trends are up (Exhibit 7), as trucking rates rise, although off a better y/y comp in September. The present constraints on drivers and industry supply are real (Exhibit 8), so even with better demand, fewer trucks are running and rates are rising significantly. How much capacity can be coaxed to enter next year in this tight supply/demand environment will play heavily into the ultimate growth in the shipper’s average freight bill.

Chart 8 - Capacity constraints evident in both large and small fleets

The Cass Truckload Linehaul Index, which measures per-mile linehaul rates for the largest segment in the domestic transportation space, declined 2.7% y/y in October while increasing nearly 1% from September (Chart 9). Still, this was the best comp since September 2019, as truckload pricing continues to improve off the bottom. We believe it is not higher because it mostly includes contract rates and not the more volatile spot market (which has already moved). As contract rates are repriced over the next few quarters, this will eventually turn to y/y growth.

The combination of rising and healthy demand with limited supply is causing shippers to pay more to get their freight moved, as “turn-downs” by carriers remain high. We see this most clearly in the spot rates (Chart 10) posted here through mid-November. They have still not peaked, so the pricing outlook remains bullish for carrier negotiations with shippers, as spot rates are up substantially y/y (including fuel surcharges) in the dry van, flatbed, and reefer markets, with dry van above 2018 peak levels and reefer closing in. Flatbed is only cooling off slightly due to its higher degree of demand seasonality. 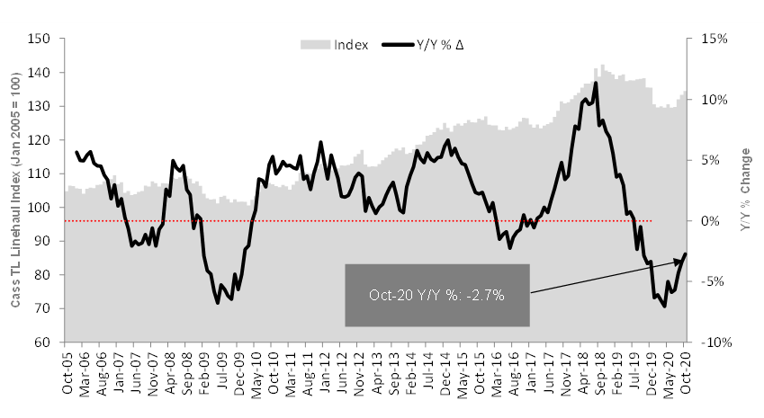 Chart 10 – Truckload spot rates have not yet peaked 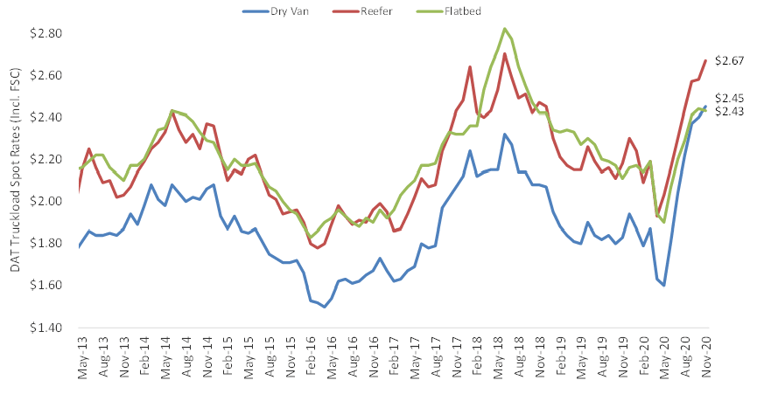 Next, we note the Cass Truckload Linehaul Index has a strong correlation to the quarterly yield metrics reported by the publicly traded TL carriers (Chart 11). October data indicates further improvement in the market. In recent 3Q20 earnings reports (released between this and the last Cass report), carrier yields turned positive, rising slightly faster than the Cass TL Index due to mix, freight selection, and specific carrier yield management actions at those companies. More rate increases will be ahead for carriers in 4Q20 and 2021 – the only debate is how high they’ll go, as we’re hearing everything from 6%-12% right now.

The Cass Intermodal Price Index (Chart 12), measuring total per-mile costs, looks at the smaller intermodal market and shows basically the opposite of what we see in the TL market, as intermodal rates hit a new low in terms of y/y comparison, dropping 23.2% y/y in October. However, it appears to have hit an absolute bottom, with the index rising 2.1% sequentially (but still the second lowest absolute reading since November 2010). Two main drivers of this – 1) the fuel surcharge – this is the big one, because while the Cass Truckload Linehaul Index excludes fuel surcharge, the intermodal index includes fuel surcharges, and 2) intermodal pricing has been on a lag vs TL pricing, so as intermodal demand improves further (Chart 13) and TL contract rates move higher, intermodal rate increases should follow. The fuel comp issue will go away in 2Q21. 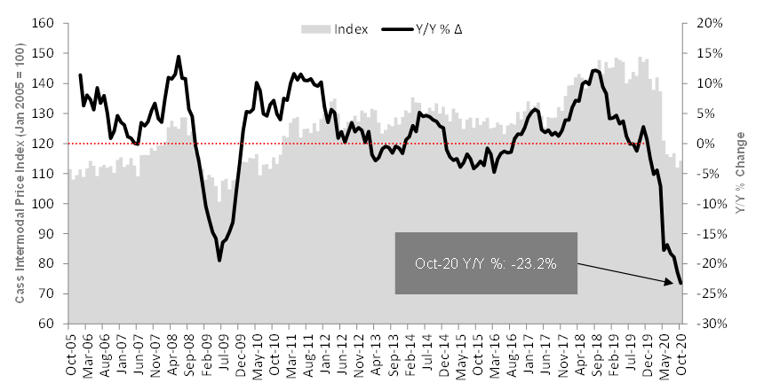 Chart 13 – Intermodal demand is growing, and with TL rates up, Intermodal pricing should turn soon

To wrap it up, October was a big month. The Cass Freight Index showed marked improvement, and after seeing no growth in 2019 and no growth the first nine months of 2020, the y/y increase in shipments was a welcome change and good sign of things to come. Due to inventory restocking, we see strong demand well into the first quarter of 2021 and then easy comps to start the second quarter. We expect healthy demand, coupled with supply constraints, to lead to continued higher prices for truckload and intermodal contracts well into 2021.