Following what we believe was the trough in April, the Cass Freight Index® showed some—but only little—improvement in activity last month. The index for both shipments and expenditures remained at recessionary levels and came in >20% below May 2019. We were surprised not to see more of an up-tick; the re-opening schedule appears to have unfolded slower than we anticipated—and also because the freight data reported by some of the public companies (LTL carriers and rails specifically) showed a more significant sequential jump and better y/y improvements than Cass showed. June is normally the best month of the second quarter, and we’d expect a significant improvement in the Cass Index this month – even if still well below year-ago readings. We do not believe we will reach 2019 freight activity levels until 2021 (at the earliest) due to the significant rise in unemployment and other results of government intervention.

As a measure of economic activity, Cass Freight Index shipment volumes dropped 23.6% vs. year-ago levels (Chart 1), slightly worse than the -22.7% y/y change in April. But the absolute index reading nudged up 1.6% sequentially from 0.923 to 0.938. This shows, in our view, a continued severe weakness in the U.S. economy that is counter to the stock market surge we saw from mid-May until the pull-back this week (giving some justification to the pull-back). 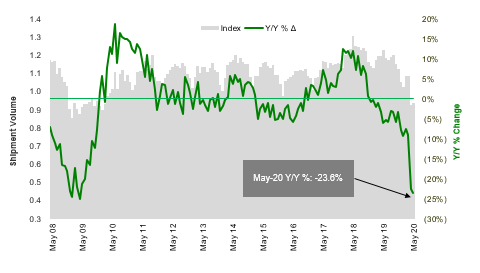 We are now close to 80% through the second quarter of 2020, and we see volumes down double-digits for most carriers across most modes in the U.S., including truckload, LTL, intermodal, and rail. E-commerce (including parcel and big and bulky last mile) remains a hot area, as long-term trends in consumer buying patterns were accelerated in recent months. Customer exposure is also the biggest differentiator in terms of carrier to carrier performance.

Consumer confidence remained poor through May (Chart 3), as uncertainty about the recovery lingers. With all the talk about potential shapes the recovery could take, we feel comfortable removing a “V” from that discussion. The long-term effects of sky-high unemployment and 0% interest rates should be quite negative and sufficient this year to suppress any kind of sharp rebound in activity.

Chart 3 – Consumer confidence in May remained near April levels 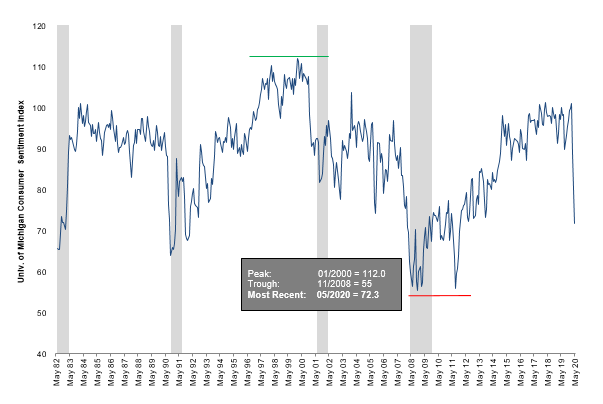 On the international side, we saw May container volumes bounce back at the Port of Long Beach, from a 20% y/y drop in import volumes in April to a 7.6% y/y increase in May. But then the Port of Los Angeles reported volumes down 30% y/y in May (but vs. a strong May 2019). So, ocean freight, on balance, remains soft. International airfreight volumes have softened, but capacity remains constrained, and yields continue to stay well above normal levels.

The weekly rail traffic data (Chart 4), excluding coal and grain shipments, typically tracks comparably to the Cass index, but it seemed to outperform last month—at least in y/y growth off the bottom (possibly due to a weaker truckload environment or freight mix issue). For June, we expect these numbers to get “less bad,” as businesses open more and consumers slowly start to leave their homes. However, shipment levels should remain below year-ago levels all year. 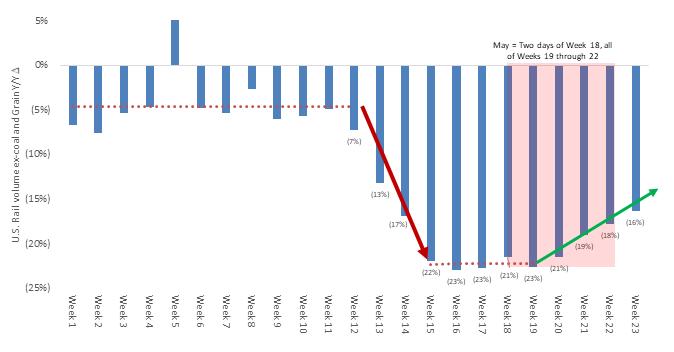 Back to the Cass Freight Index, freight expenditures also fell in May, down 21.2% y/y (Chart 5)—the worst reading since the global financial crisis and worse than April. It fell 5.7% sequentially, but revenue per shipment rose 3.1% y/y. Like April, we did not expect expenditures to outpace volumes, particularly with the intermodal and truckload linehaul indexes (which measuring prices) dropping and fuel declining y/y (Chart  7). With shipments down 23.6%, and expenditures down less (21.2%), and knowing that prices were down y/y, you may be asking how overall freight spend could be down less than volumes, if rates were lower. Our view remains that it has been a mix issue in that the freight that has been moving has a higher revenue per shipment, due to longer average length of haul (which has a negative impact on TL yield) and/or other characteristics. And those customers who remained opened for business had a higher freight cost per shipment than those who were closed. (Note that the intermodal and truckload linehaul indexes look at per-mile costs.) We believe expenditures on an apples-to-apples basis were down more than volume, and lower fuel surcharges are offering shippers at least some near-term relief with respect to their freight budgets. 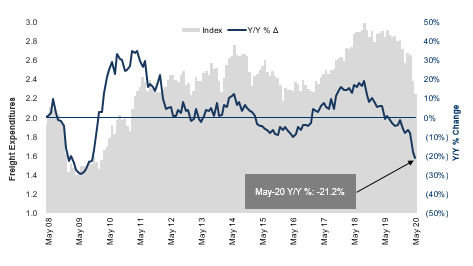 Chart 7 – While fuel prices appear to have bottomed, they are well below year-ago levels 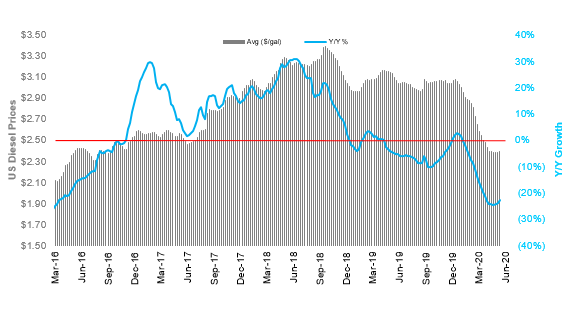 The Cass Truckload Linehaul Index® (Chart 8), measuring per-mile linehaul rates, takes a look at the largest (and most fragmented) market in the domestic transportation landscape. This index declined 5.0% in May after a 7.0% y/y drop in April (the worst comp of the last 15 years), so we believe TL rates have bottomed.

Of course, it is the supply/demand balance that determines truckload rates, and there’s really nowhere to hide when volumes drop off a cliff. But truck volumes sequentially continue to improve, so from here we are watching pricing to see how quickly the demand recovery catches up to the falling industry supply of trucks and drivers. Tractor orders were already expected to be much lower this year than last in January, and as a result of the freight collapse recently, we expect builds and orders to fall even more. 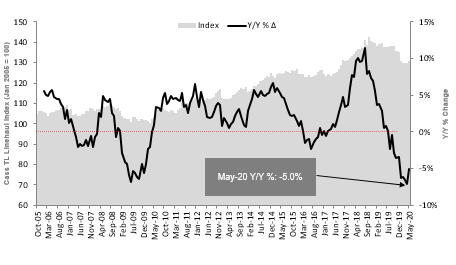 As we typically note, the Cass Truckload Linehaul Index (Chart 10) has a strong correlation to the quarterly yield metrics reported by the publicly traded TL carriers. May’s data is showing that TL yields will probably average ~5% decline y/y in 2Q20. We’ll have an even better idea next month exactly what carriers, as a group, are likely to report . 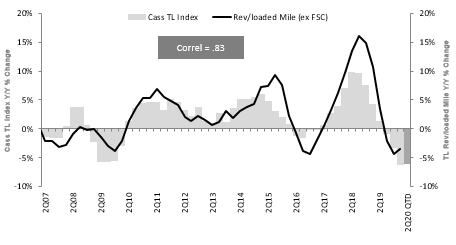 When we look at spot rates (Chart 11) posted in May (and into June), we have seen a similar bounce off the April bottom, but they’re not even back to year-end 2019 levels. Spot rates are currently tracking down 8% y/y in the dry van market. Reefer is holding slightly better, down 7% y/y, while flatbed is still off 13% right now vs. a year ago. We believe the spot market (as well as the contract market) has bottomed and that the rebound in rates, as discussed above, will depend on the strength of the recovery coupled with the pinch of industry supply from factors besides just truck production, such as rising insurance costs and limited driver supply.

Chart 11 – All truckload segments have bottomed in pricing 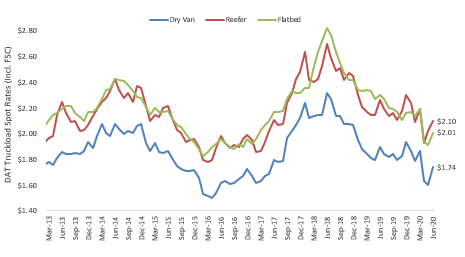 In summary, while the Cass Shipments Index likely bottomed for this cycle in April, May was not as strong as anticipated. June readings should be better and, like many other things right now, will depend on how quickly the economy re-opens and how quickly the very high unemployment levels can retreat. 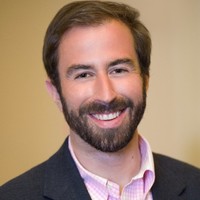