The shipments component of the Cass Freight Index® accelerated to 2.7% y/y growth in November 2020, after turning positive in October for the first time in almost two years. The acceleration was more than explained by an easier prior year comparison, as the Cass Shipments Index fell 2.2% in November from the October level. Seasonally adjusted (SA), the m/m decline was a narrower 1.0%. This small sequential pullback followed five consecutive months of strong recovery averaging 5.0% sequential improvement (SA), and is likely due to the worsening pandemic numbers impacting the trajectory of the recovery in November. 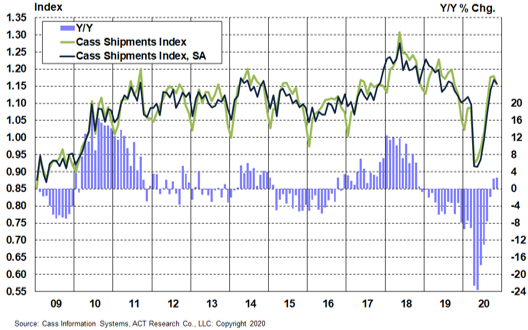 Receive an alert when new reports are released.

One of the factors supporting the recovery in the shipments index in recent months is the less-than-truckload (LTL) sector, where tonnage accelerated to 6% y/y growth in November, from a 5% y/y increase in October. After declining in 20 of the 22 months through August, recovery is under way in LTL with three straight months of accelerating growth.

The expenditures component of the Cass Freight Index accelerated to 5.7% y/y growth in November from 3.1% y/y growth in October. On a sequential basis, despite slightly lower shipments in November compared to October, expenditures rose 2.9% (5.1% on a seasonally adjusted basis). This reflects a pickup in rate inflation as the effects of record truckload spot rates gradually broaden out into contract rates. Coming into the end of 2020, expenditures are testing the highs posted in late 2018/early 2019.

A simple calculation of the Cass Freight Index data can give us an “implied freight rates” data set that explains the overall movement in rates. The freight rates embedded in the Cass Freight Index (determined by dividing expenditures by shipments) accelerated to a 3.0% y/y increase in November from a 0.6% y/y increase in October. This data is diversified among all modes, with truckload representing more than half of the dollars, followed by rail, LTL, parcel, and so on. Based in part on spot trends, implied freight rates are likely to accelerate in 2021.

In November, the Cass Truckload Linehaul Index® inflected to a 0.6% y/y increase (the first increase in 15 months) and improved from a 2.7% y/y decline in October. On a m/m basis, the index rose 1.4% in November, resuming the uptrend which started in August but paused in October. Our sense is contract rates are accelerating, as also shown in the implied 3.0% y/y growth rate in the Cass Freight Index noted above, and we expect the Cass Truckload Linehaul Index to continue to improve in the coming months. 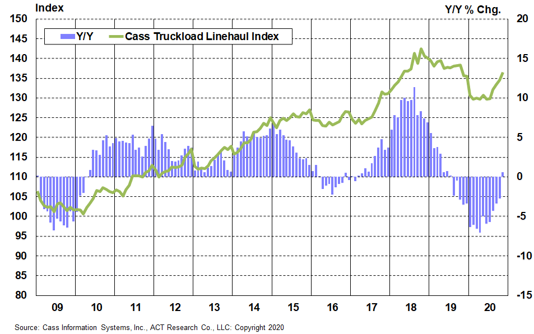 Although the recovery in shipments stalled a bit in November, we feel that, based on low inventory levels at U.S. retailers and the continuing strength in intermodal volumes on the North American railroad network, freight trends look set to continue to move higher in the near term. While near-term risks from the pandemic remain elevated, recently begun vaccinations will reduce these risks in the coming months.

The economists at ACT Research, a leading publisher of freight market data and forecasts and a Cass partner, expect strong 3.9% U.S. GDP growth in 2021 as the economy recovers, and though we expect that recovery to be more service-oriented than freight-oriented, the freight cycle also has a number of growth tailwinds following a nearly two-year freight downturn. As shown in the table below, North American rail volumes have declined y/y for seven straight quarters and are on track to turn positive in Q4 as a new cycle begins.

We think that while the rest of the world will have a myriad of challenges with vaccine logistics, the U.S. has ample capacity for vaccine shipments, for example, with our fleet of about 427,000 refrigerated van trailers. The package carriers are best positioned to deliver the vaccines with their air and ground networks, and we would expect the overall impact on the Cass Shipments Index in 2021 from vaccine shipments to be minor. There are much better reasons to expect strong growth in freight in 2021, not least the economic boost that will accompany the vaccines.