Not a Straightforward Descent

The shipments component of the Cass Freight Index® rose 5.4% m/m in May (up 4.0% SA), more than recovering the 2.6% decline in April. On a tough comparison, the y/y decline worsened to 2.7%, as expected, but the result was 1% ahead of the ACT Research estimate.

Normal seasonality from here would have the shipments component back up 2% y/y in June and flat to up 1% for 2022. The news from the retail sector and in the oil markets suggest that’s probably optimistic, but at this point, it’s a pretty stable environment. No major downturn. 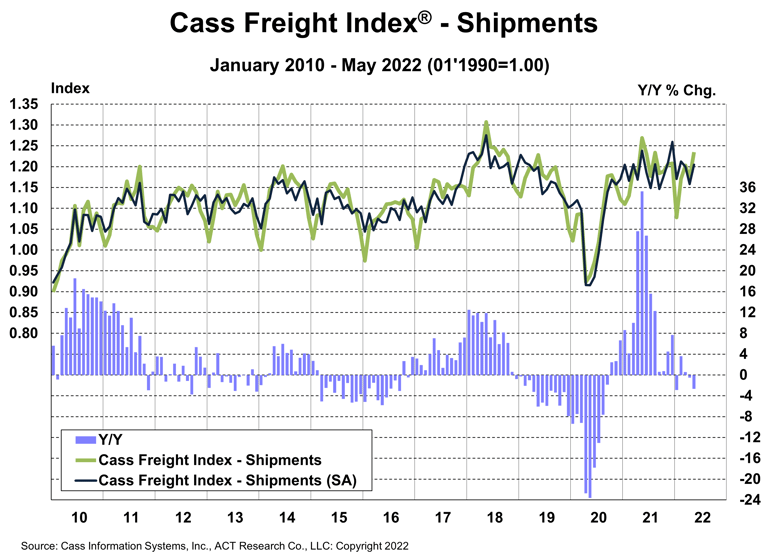 The expenditures component of the Cass Freight Index, which measures the total amount spent on freight, fell 4.9% m/m in May with shipments up 5.4% and rates down 9.8%. The m/m noise on rates is largely mix, with more LTL and less TL in the data set, and on a y/y basis expenditures were up 28% y/y, versus a 31% increase in April. 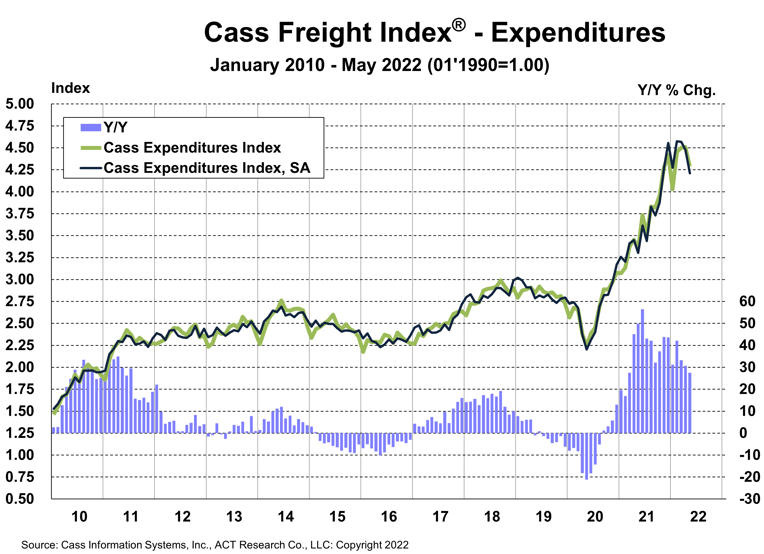 The freight rates embedded in the two components of the Cass Freight Index still rose 31% y/y in May, in line with April, despite a 9.8% m/m decline. Comps, what can we say?

It’s tempting to see this as a sign that freight costs have peaked, and on a y/y basis that is true, as inferred rates will slow all the way to 13% y/y in June on normal seasonality. Supply/demand fundamentals have certainly turned looser this year, so it wouldn’t be an unreasonable conclusion. However, as noted above, the drop was largely due to mix, and with fuel prices still adding upward pressure, the descent is not straightforward.

These rates are representative of the industry’s mix of contract and spot rates, but the 15% y/y decline in rates ex-fuel in the more real-time spot markets in early-June portends a downcycle on the horizon. 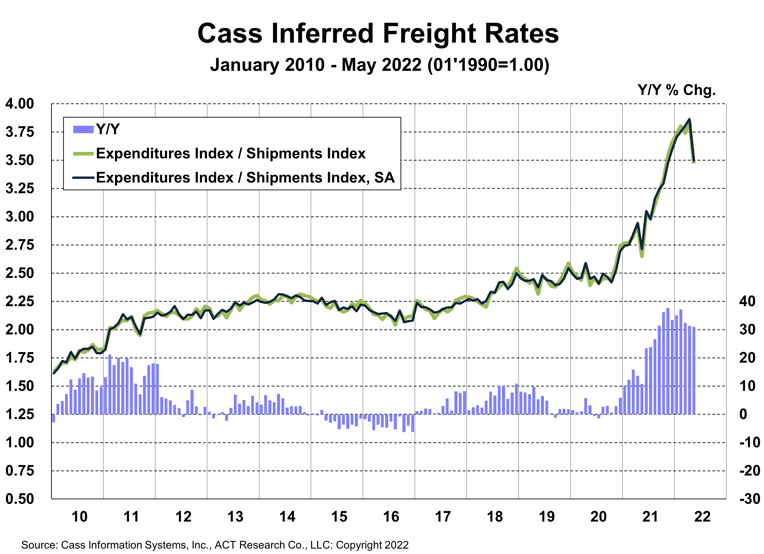 Significant risks, such as new COVID variants, remain and equipment capacity remains limited and could tighten further if the Russia/Ukraine war or China lockdowns worsen the chip shortage. But 2022 has featured a big improvement in driver availability, and a flattening of freight demand. This is a deflationary combination, though it will take several months to filter from the spot market into contract rates.

There have been tentative signs of recovering intermodal network fluidity as chassis production continues to accelerate and brisk hiring continues. Intermodal volumes continue to underperform the shipments component of the Cass Freight Index, though to a lesser degree as the latter has softened in recent months. Rail network congestion continues to add to Cass Inferred Freight Rates via excess miles in the freight network, but this effect is set to reverse as intermodal volumes are uniquely poised to grow y/y in 2H’22. 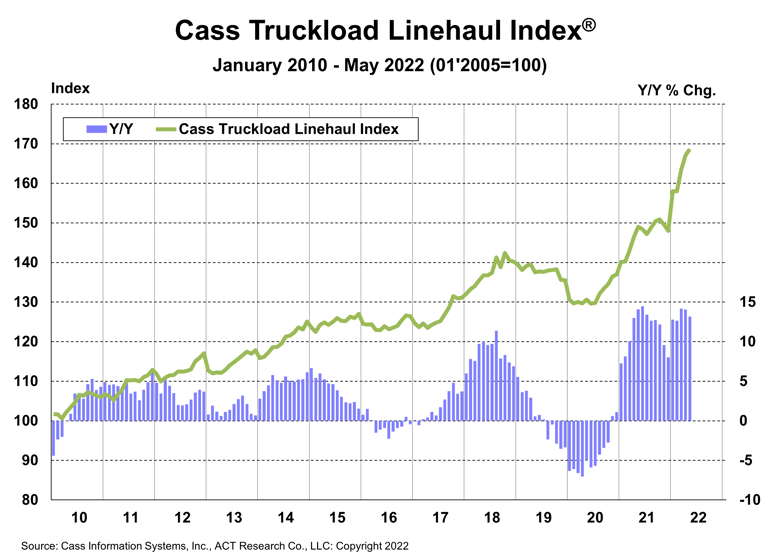 Excess miles, rising fuel surcharges, and accessorial fees are all factors included in the inferred rate series, but not the Cass Truckload Linehaul Index. The true increase in freight cost, depending on how these factors shake out, is somewhere between the 14% y/y increase in the Cass Truckload Linehaul Index and the 31% y/y increase in the inferred rate. Depending on the mode, we estimate fuel costs alone are currently adding roughly 10% to the cost of freight on a y/y basis, clearly the largest part of the difference.

Growing evidence of weaker goods consumption, rising services substitution, and rebuilt inventories, with some categories now overstocked, was perhaps the most impactful news in freight this month.

Just as the freight plateau is being reinforced, trucking employment rose the most on record with 27,300 new jobs added in the past two months. The nearly 5% y/y growth rate in the BLS Truck Transportation Employment data series, along with the elevated ACT Driver Availability Index, show a very different market balance than just six months ago. 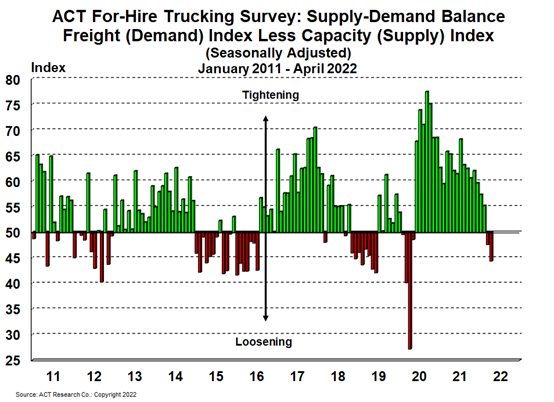 Now that the pendulum has begun to swing, “how bad?” and “how long?” have become some of the most crucial questions. The ACT Freight Forecast report provides monthly, quarterly, and annual predictions for the TL, LTL, and intermodal markets, including capacity, volumes, and rates. The report provides monthly updates of forecasts for the shipments component of the Cass Freight Index and the Cass Truckload Linehaul Index through 2024, as well as DAT spot rates by trailer type, including and excluding fuel surcharges.