* If you follow our truckload linehaul index closely, please take note. As we do occasionally, we have fine-tuned our index methodology. Due to this, we have revised our January 2022 index value from 150.2 to 158.0 (the same value as February).

U.S. freight volumes regained ground in February after a significant January Omicron impact, with the shipments component of the Cass Freight Index up 8.6% from January, and up 3.6% y/y. 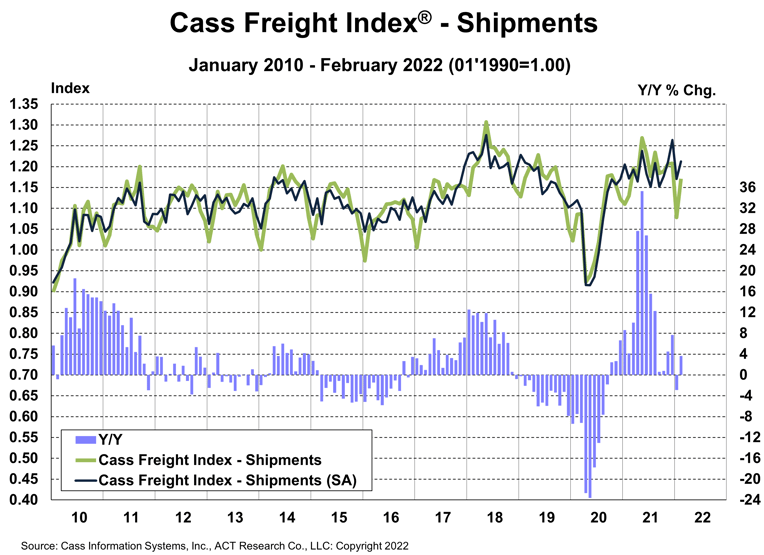 The expenditures component of the Cass Freight Index, which measures the total amount spent on freight, rose 10.6% m/m in February to 4.453 after an 8.9% Omicron impact in January, and was up 42% y/y.

This index rose 38% in 2021, after a 7% decline in 2020 and no change in 2019. Tougher comparisons in the coming months will naturally slow these y/y increases, but just using normal seasonality from here, the increase in 2022 will still be about 25%. 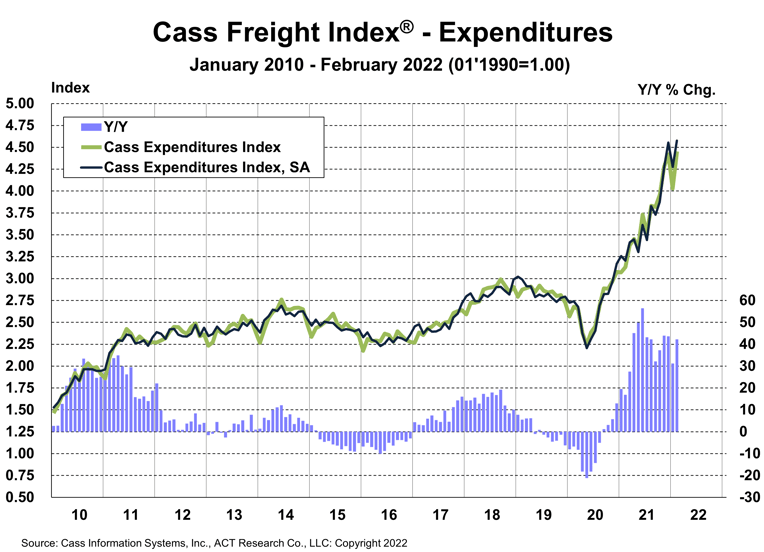 A simple calculation of the Cass Freight Index data (expenditures divided by shipments) produces a data set of inferred freight rates that explains the overall movement in cost per shipment.

The m/m increase is mainly as Omicron-related effects on capacity continue to push rates higher, which will continue to impact new contract rates for a few more months. However, in early March there are signs of lower spot rates despite the large increase in fuel prices.

Though Class 8 tractor capacity remains tight and is at increased risk if the Russia/Ukraine war worsens the chip shortage, we are seeing tangible signs of improvement in driver availability, which could begin to slow the trend in freight rates.

As the railroads continue to struggle, excess miles in the freight network are persisting, which also adds to these costs. Chassis production has only improved enough to turn the direction of the chassis fleet from contraction to slight growth, and the chassis fleet remains far from what is needed to address rail network congestion.

After rising 23% in 2021, Cass Inferred Freight Rates are on a 23% trend again for 2022. The data set is diversified among all  domestic modes, with truckload representing more than half of the dollars, followed by LTL, rail, parcel, and so on. 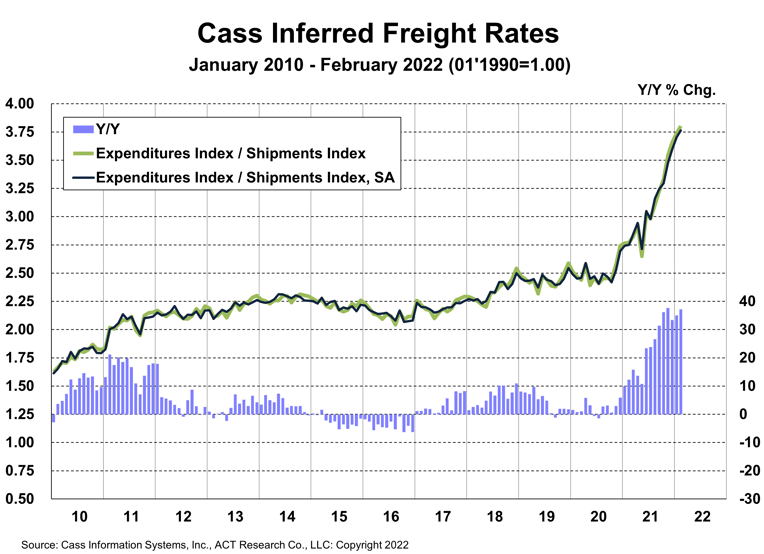 Strong freight demand and significant capacity limitations are continuing to press truckload rates higher. As intermodal network congestion gradually eases over the course of 2022, a reversal to shorter length of haul will likely add upward pressure to this index above and beyond market rate increases. 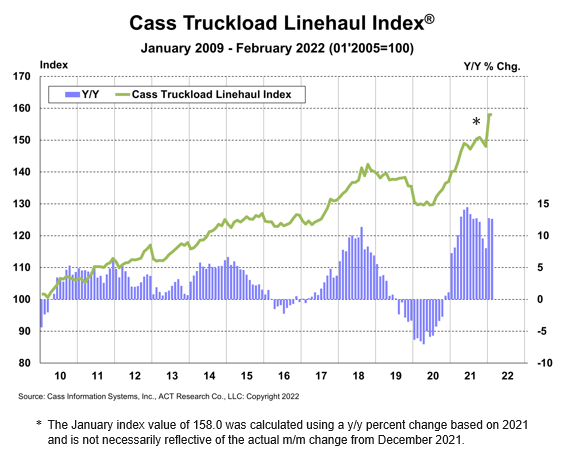 To demonstrate the effect of longer length of haul (LOH) on truckload rates, the scatter plot below analyzes a sample of 27 million truckload shipments in the Cass data set. Though the data set is so deep it arguably needs at least another dimension, we can say from this simple linear model that every 100-mile increase in LOH historically results in about a 2.1% lower rate per mile.

In February, the LOH in the Cass truckload data set was about 141 miles longer y/y, so LOH reduced the Cass Truckload Linehaul Index by about 3.0% and mileage-neutral truckload rates rose more like 16% y/y. 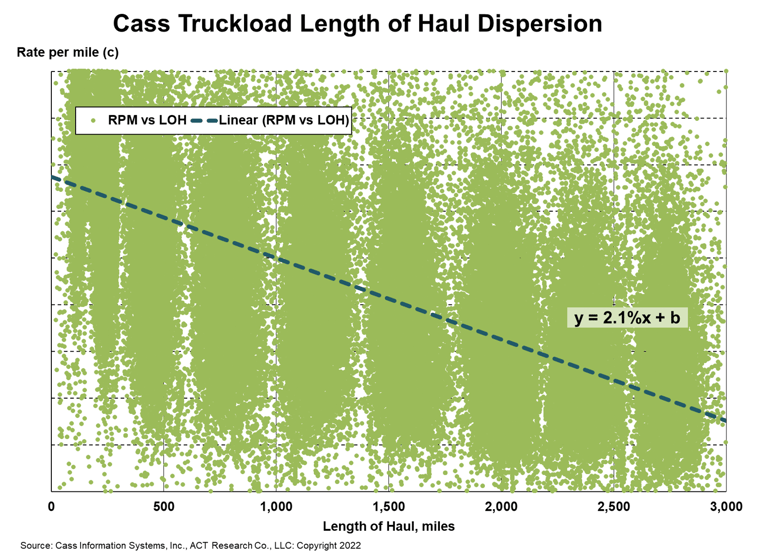 Energy markets aside for the moment, global supply of neon gas, critical for laser lithography in semiconductor manufacturing, just so happens to be concentrated in Odessa, Ukraine, an export hub on the Black Sea. These gases, purified in Ukraine but generated in Russian steelmaking, supply roughly half of the world’s neon, according to various estimates, and ~90% of U.S. chip-making neon supply, according to Techcet, specialty chemical consultants. Supplies of nickel, palladium, and other commodities are also at risk.

Just as chip supply was starting to improve, the risk to auto and truck manufacturing supply chains has risen again. A worsening chip shortage could hit vehicle production and tighten trucking markets further, and the energy shock brings a whole different set of repercussions for the economy at large.

The spike in crude oil prices to $120+ per barrel as the U.S. moved to cut off Russian oil imports will cost U.S. consumers and slow freight demand. Truckload fleets pass through most of their fuel costs, but generally do not have surcharges on empty miles, so there is a modest financial hit to carriers. Shippers face a roughly 5% increase in U.S. truckload freight costs this year just from adjusting fuel surcharges to higher prices, assuming things settle down a bit from here.

In the week after the war started, U.S. retail gasoline prices jumped 50c per gallon and diesel surged 75c to a record $4.85 from $4.10 per gallon. In a week, this added about 4% to the cost of truckload freight, about 12c/mile in fuel surcharge. But spot rates have not risen to account for the higher fuel price, implying deflation net of fuel. Supply side progress continues, and we’ve lowered our GDP forecasts to account for significantly higher fuel costs.

If you rely on freight data to run your business, you may want to take a look at the ACT Freight Forecast report, which provides monthly predictions for the TL, LTL and intermodal markets, including capacity, volumes and rates, and forecasts for the shipments component of the Cass Freight Index and the Cass Truckload Linehaul Index through 2023.