U.S. freight volumes fell in April from March and the year-ago period. And with more difficult comparisons in the next few months as global supply chain disruptions are set to intensify, more softness is on the horizon.

The shipments component of the Cass Freight Index fell 0.5% y/y, following a 0.6% y/y increase in March. 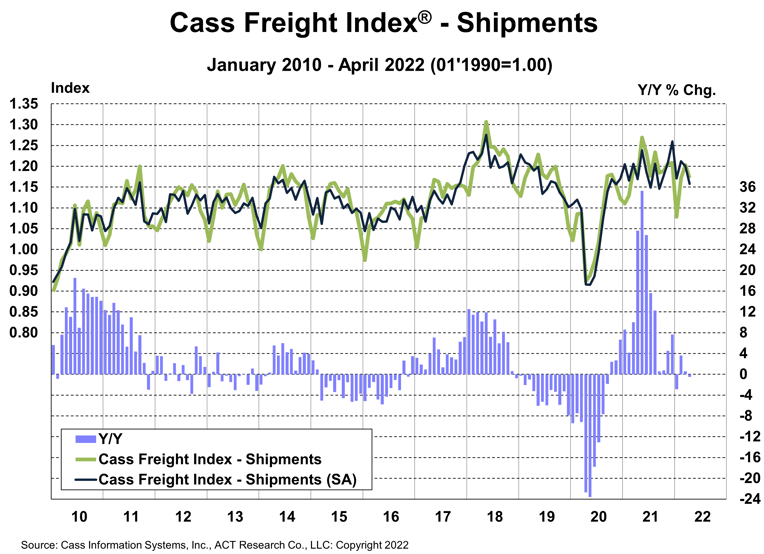 The expenditures component of the Cass Freight Index, which measures the total amount spent on freight, rose 0.2% m/m in April against a shipment decline of 2.6%. Compared to a year ago, total freight expenditures were up 31% y/y. Overall rates were up 2.9% (see Freight Rates, below).

This index rose 38% in 2021, after a 7% decline in 2020 and no change in 2019. Tougher comparisons in the coming months will naturally slow these y/y increases, but just using normal seasonality from here, the increase in 2022 will still be about 24%. 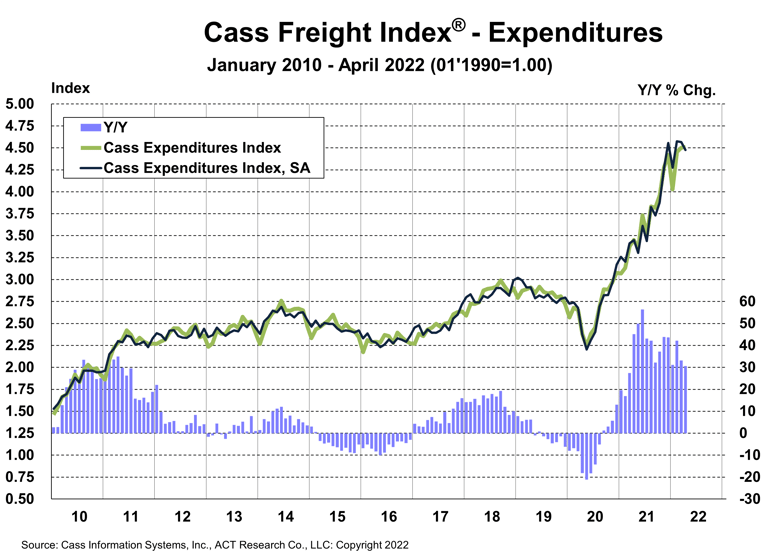 The freight rates embedded in the two components of the Cass Freight Index slowed to a 31% y/y increase in April from 32% in March.

These rates are representative of the industry’s mix of contract and spot rates, but spot rates have turned sharply lower ex-fuel recently in the more real-time spot markets. Though these rates are all-in, in contrast to the Cass Truckload Linehaul Index which excludes fuel and accessorials, this signals significant deceleration in the next six months, even assuming higher fuel costs persist.

Significant risks remain, such as new COVID variants, and equipment capacity remains limited and could tighten further if the Russia/Ukraine war worsens the chip shortage. But 2022 has featured big improvement in driver availability and slowing of freight demand. This is a deflationary combination, though it will take several months to filter from the spot market into contract rates.

There have been tentative signs of recovering intermodal network fluidity as chassis production continues to accelerate and brisk hiring continues. But intermodal volumes continue to underperform the shipments component of the Cass Freight Index, and rail network congestion continues to add to Cass Inferred Freight Rates via excess miles in the freight network.

Freight rates rose 23% in 2021. The normal seasonal pattern from here would suggest some acceleration this year, and it is likely to accelerate next month on an easy comparison, but we would expect a slower full-year rate change. 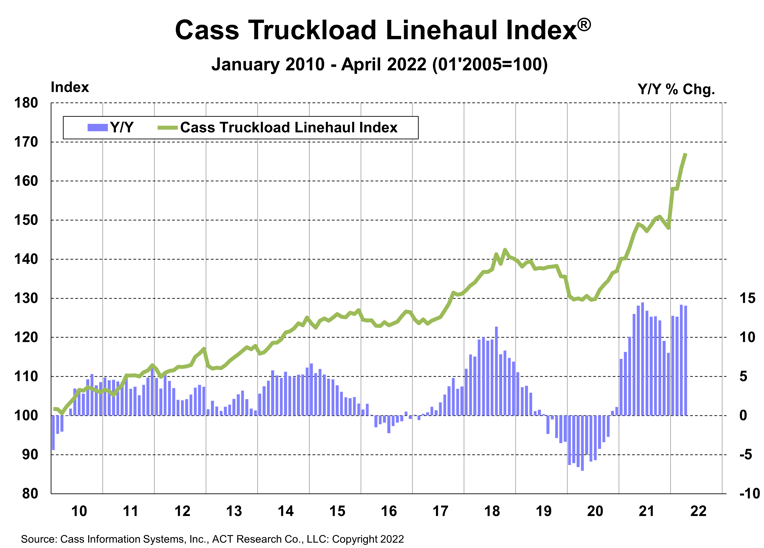 As recently as the start of this year, pricing power in the truckload market was firmly with fleets. After nearly two years in this position, the concept of the pricing power pendulum almost seemed obsolete to many. Until it swung and cratered rates. Once a pendulum gets going, it’s very hard to stop.

Not coincidentally, the Supply-Demand Balance in ACT Research’s for-hire survey turned loose this month, for the first time since June 2020, as the rebalancing, drawn-out by the pandemic, hit critical mass. 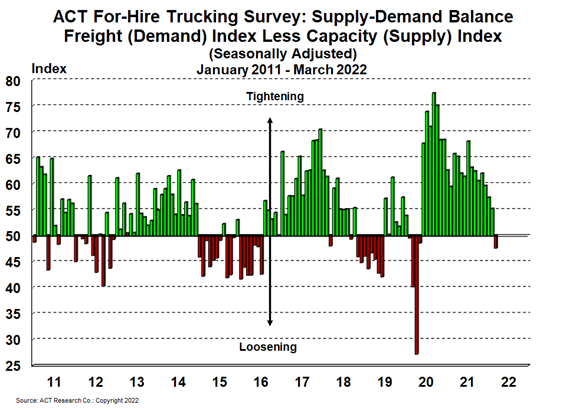 The combination of inflation, Fed monetary tightening, war in Europe, and substitution back to services from goods are all leading to a downshift in the freight cycle. And consistent with the fundamental reason for cyclicality in the freight sector, the capacity response is occurring just as the surge in demand is ebbing.

While this will be good news to some, including shippers and those anxious about broader inflation, it is a sign for fleets to batten the hatches. Far from stagflation, these dynamics strongly suggest freight rate deflation is on the horizon.

If you rely on freight data to run your business, you may want to take a look at the ACT Freight Forecast report, which provides monthly predictions for the TL, LTL and intermodal markets, including capacity, volumes and rates, and forecasts for the shipments component of the Cass Freight Index and the Cass Truckload Linehaul Index through 2024.