The shipments component of the Cass Freight Index® declined 2.3% on a y/y basis in June, similar to the 2.7% y/y decline in May. After the May result was slightly ahead of ACT Research’s estimate, the June result was slightly behind, but no big surprises.

Normal seasonality from this index level would imply shipments down 1% y/y in Q3 and down 5% y/y in Q4, as the current soft patch is becoming increasingly clear in the data. 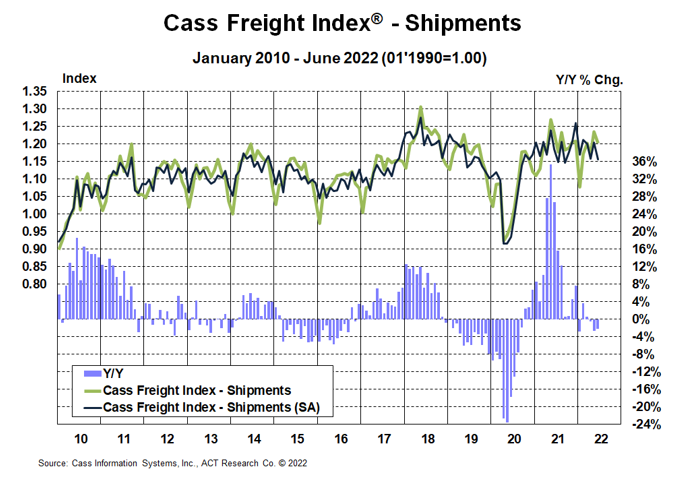 The expenditures component of the Cass Freight Index, which measures the total amount spent on freight, rose 8.8% m/m in June to a new record, with shipments down 2.6% and rates up 11.7%. The m/m noise on rates is largely mix, and reversed a 9.8% decline last month, and just means there was more truckload in the mix in June and more less-than-truckload (LTL) in May.

We estimate roughly 10 percentage points of the y/y increase are currently due to fuel prices alone. As a reminder, this index includes changes in fuel, modal mix, intramodal mix (which affects length of haul), and accessorial charges. 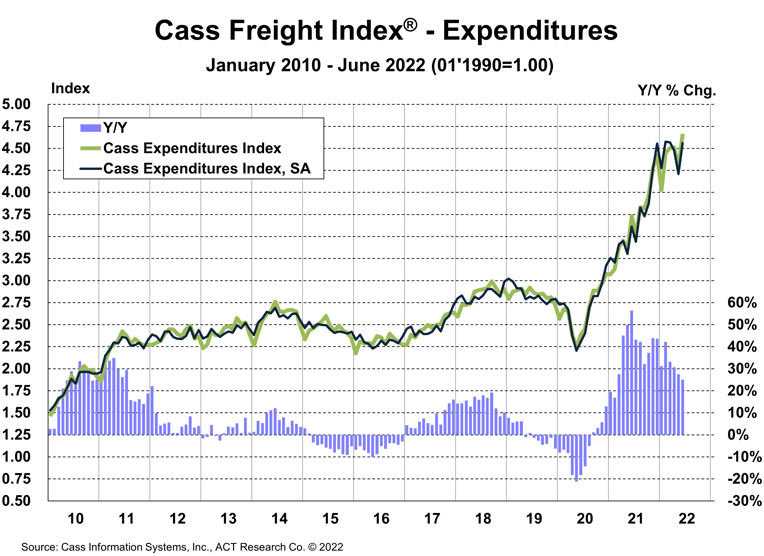 The sequential increase was largely due to modal mix, as truckload moves (a higher cost per shipment) increased compared to LTL (lower cost per shipment), reversing the increase in LTL mix in May. Fuel prices also pushed rates up in June. And while underlying truckload rates started to pull back in June (see the Cass Truckload Linehaul Index, below), LTL rates continued to rise m/m.

The May decline in cost per shipment was also largely due to mix, as noted last month, and June freight rates were just 0.8% above April. We still see this as a leveling off of industry rates, with ongoing upward pressure from fuel even as the market balance has loosened this year and should begin to provide modest relief. This is subject in no small part to diesel prices, which have begun to drop, now down 24c over the past three weeks to a recent $5.57 per gallon according to the U.S. Energy Information Administration (EIA). The price of diesel remains well above where our simple regression with crude would suggest, reflecting a considerable war premium.

So, the familiar refrain is true, shippers aren’t feeling the savings from declining spot rates. Yet. At this point, it is increasingly oil prices in the way, but such relief is increasingly likely, which is welcome news for the broader inflation picture. 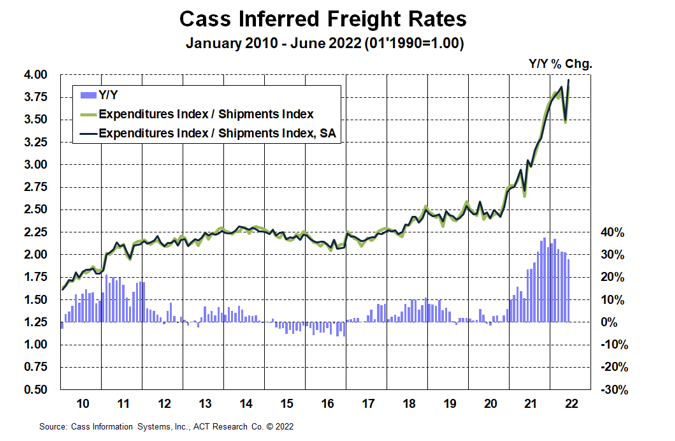 The Cass Truckload Linehaul Index® , which measures market fluctuations in per-mile truckload linehaul rates, independent of additional cost components such as fuel and accessorials, rose 11.6% y/y in June to 165.7 after rising 13.2% y/y in May. 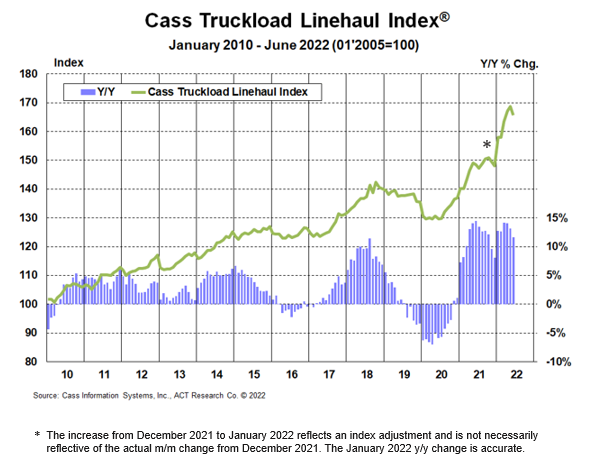 You may find a chart of inventories, one of the most lagged (toughest to calculate) monthly economic data series (with the latest numbers as of April), odd in the section about the outlook. But even from a few months ago, inventories provide key information about the future of the cycle. And we can say clearly that the current inventory levels do not bode well for freight demand. 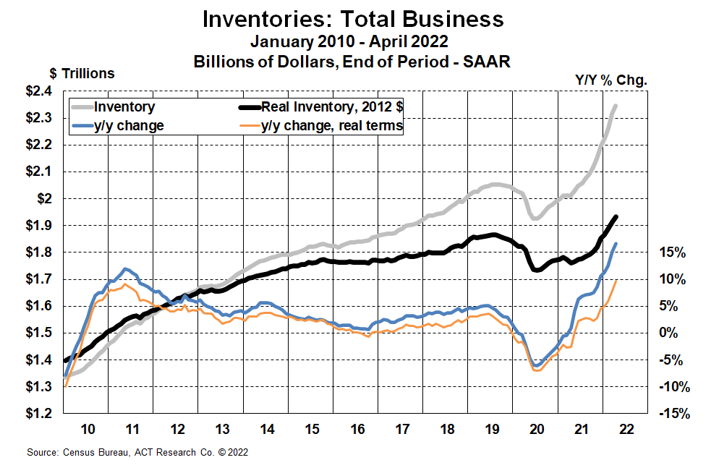 Now that the pendulum has begun to swing, “how bad?” and “how long?” have become some of the most crucial questions. The ACT Freight Forecast report provides monthly, quarterly, and annual predictions for the TL, LTL, and intermodal markets, including capacity, volumes, and rates. The report provides monthly updates of forecasts for the shipments component of the Cass Freight Index® and the Cass Truckload Linehaul Index® through 2024, as well as DAT spot rates by trailer type, including and excluding fuel surcharges.

Tim Denoyer joined ACT Research in 2017, after spending fifteen years in equity research focused primarily on the transportation, machinery, and automotive industries. Tim is a senior analyst leading ACT’s team transportation research effort, and the primary author of the ACT Freight Forecast, U.S. Rate and Volume Outlook. Research associate Carter Vieth, who joined ACT in early 2020 after graduating from Indiana University, also contributes to the report. This report provides supply chain professionals with better visibility on the future of pricing and volume in trucking, the core of the $1.06 trillion U.S. freight transportation industry, including truckload, less-than-truckload, and intermodal.