ST. LOUIS - October 26, 2017 - Cass Information Systems, Inc. (NASDAQ: CASS), the nation's leading provider of transportation, energy, telecom and waste invoice payment and information services, reported third quarter 2017 earnings of $.61 per diluted share, an increase of 11% from the $.55 per diluted share it earned in the third quarter of 2016. Net income for the period was $6.9 million, compared to $6.2 million in 2016. 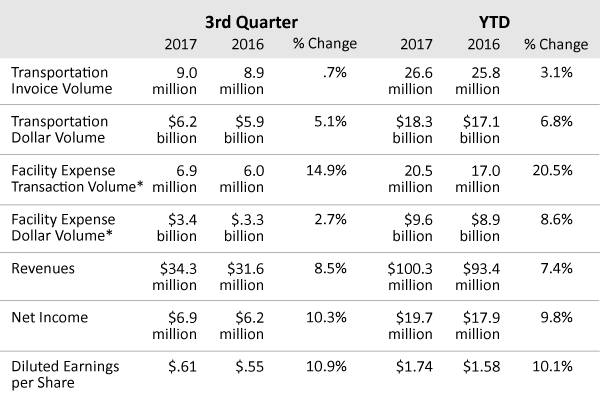 The 9% increase in revenue and 10% increase in net income was primarily attributable to three factors: continued growth in the customer base of each market; the development, deployment and expansion of new revenue-generating services; and modest improvement in the interest rate environment. The solid bottom-line advances were achieved even as Cass continued to commit significant funds to new technology and infrastructure in support of service growth.

In the transportation sector, invoice volume was up 1% while dollar volume rose 5%.

Consolidated operating expenses increased $1.5 million (6%) due mainly to on-going strategic investment in the technology and staff required to win and support new business.

“Results for the third quarter were strong and matched our expectations,” stated Eric H. Brunngraber, Cass chairman and chief executive officer. “It marks the third consecutive reporting period in which Cass has posted double-digit increases in quarterly earnings.”

Consolidated operating expenses were up 7%, or $4.7 million, stemming from investment in staff and technology as noted above.

Additionally, the company’s board of directors declared a fourth quarter dividend of $.24 per share payable December 15, 2017 to shareholders of record December 5, 2017. The new quarterly dividend is one cent or 4% higher than the previous pay-out of 23 cents per share. The upcoming cash payout will apply to all shares held after the 10% stock dividend is completed, effectively increasing the total fourth quarter dividend by nearly 15%. Cass has continuously paid regularly scheduled cash dividends since 1934.

Also, the board voted to restore the capacity of the company’s stock repurchase program to 500,000 shares.

“In authorizing a stock dividend and cash dividend increase, Cass directors again demonstrated their commitment to rewarding shareholders and optimism about the immediate and long-term prospects of the company,” said Brunngraber. “Additionally, the replenishment of the stock repurchase program affords us the flexibility to continue an initiative that has returned more than $23 million to shareholders over the past 36 months.”

Cass Information Systems, Inc. is a leading provider of integrated information and payment management solutions. Cass enables enterprises to achieve visibility, control and efficiency in their supply chains, communications networks, facilities and other operations. Disbursing $44 billion annually on behalf of clients, and with total assets of $1.5 billion, Cass is uniquely supported by Cass Commercial Bank. Founded in 1906 and a wholly owned subsidiary, Cass Bank provides sophisticated financial exchange services to the parent organization and its clients. Cass is part of the Russell 2000®. More information is available at www.cassinfo.com.

Certain matters set forth in this news release may contain forward-looking statements that are provided to assist in the understanding of anticipated future financial performance. However, such performance involves risks and uncertainties that may cause actual results to differ materially from those in such statements. For a discussion of certain factors that may cause such forward-looking statements to differ materially from the company’s actual results, see the company’s reports filed from time to time with the Securities and Exchange Commission including the company’s annual report on Form 10-K for the year ended December 31, 2016.